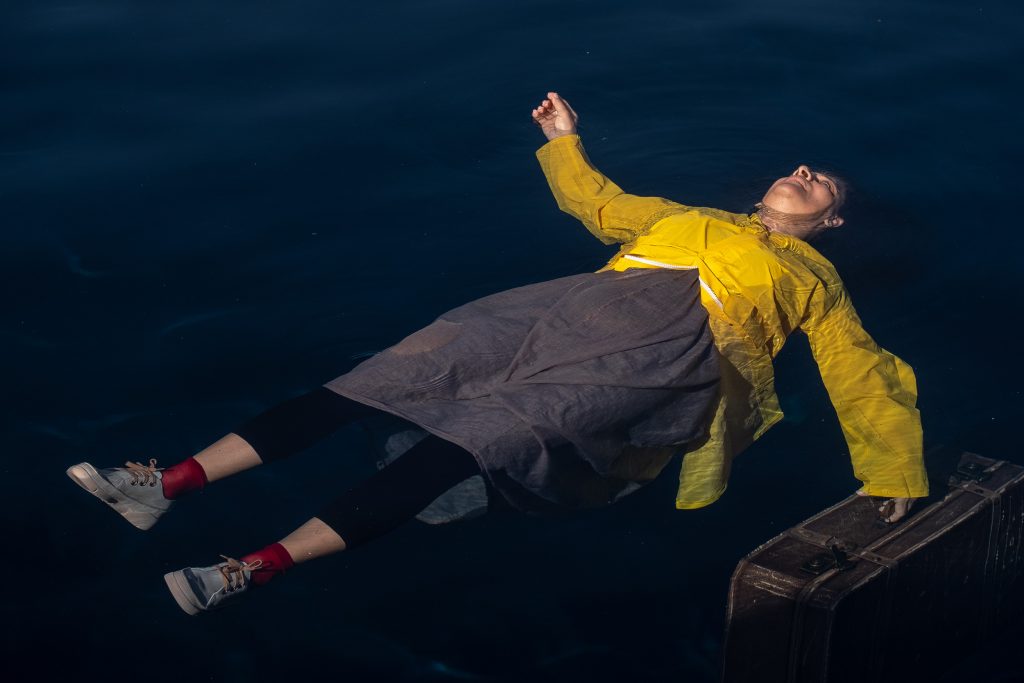 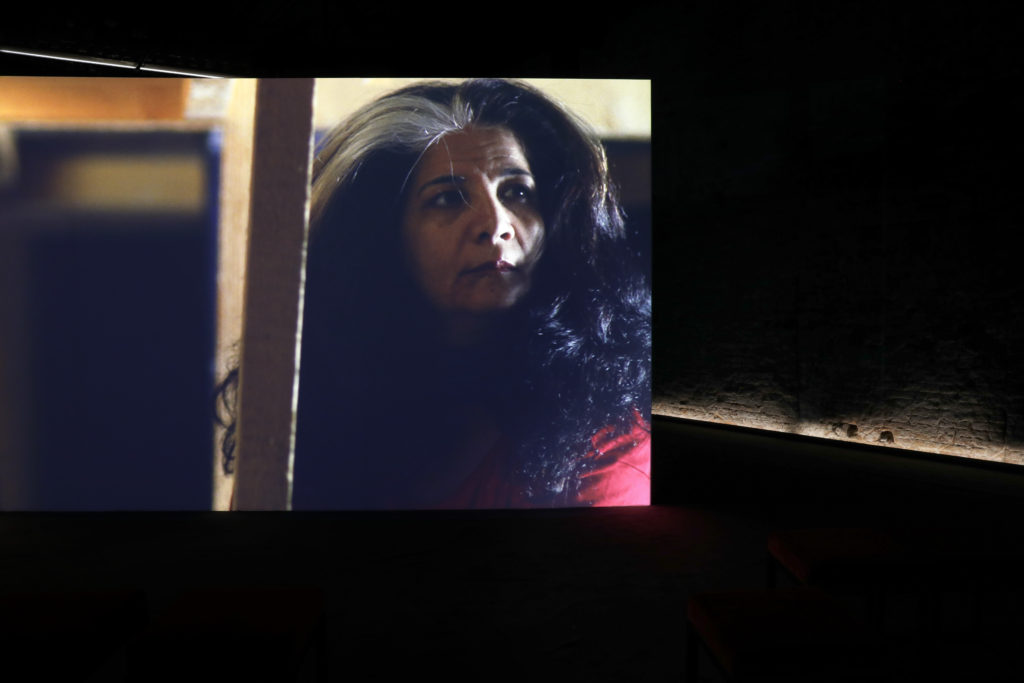 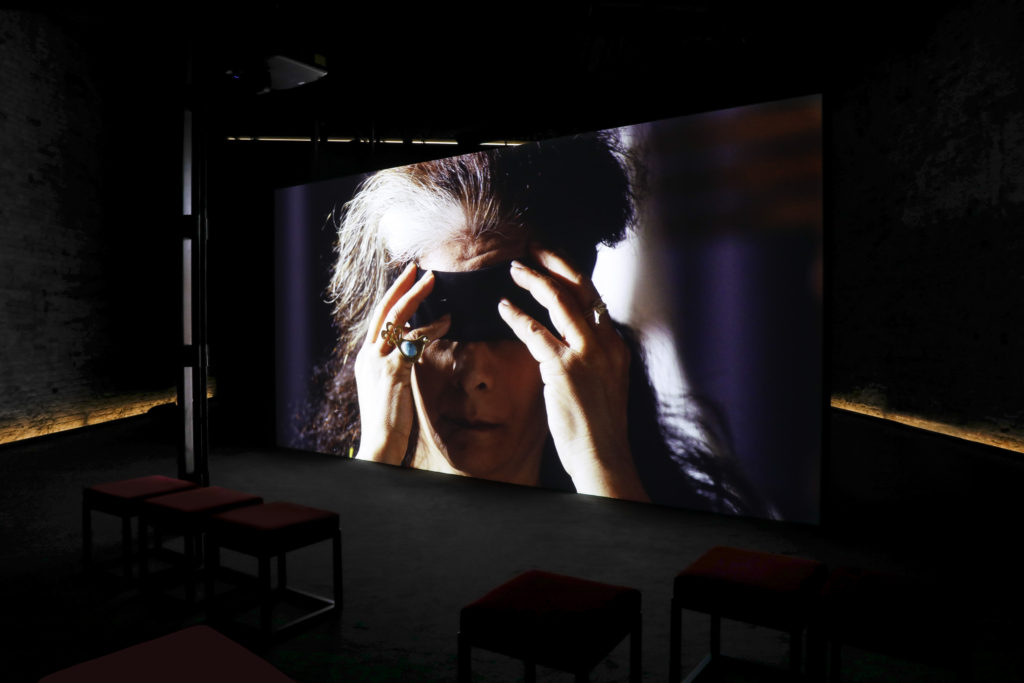 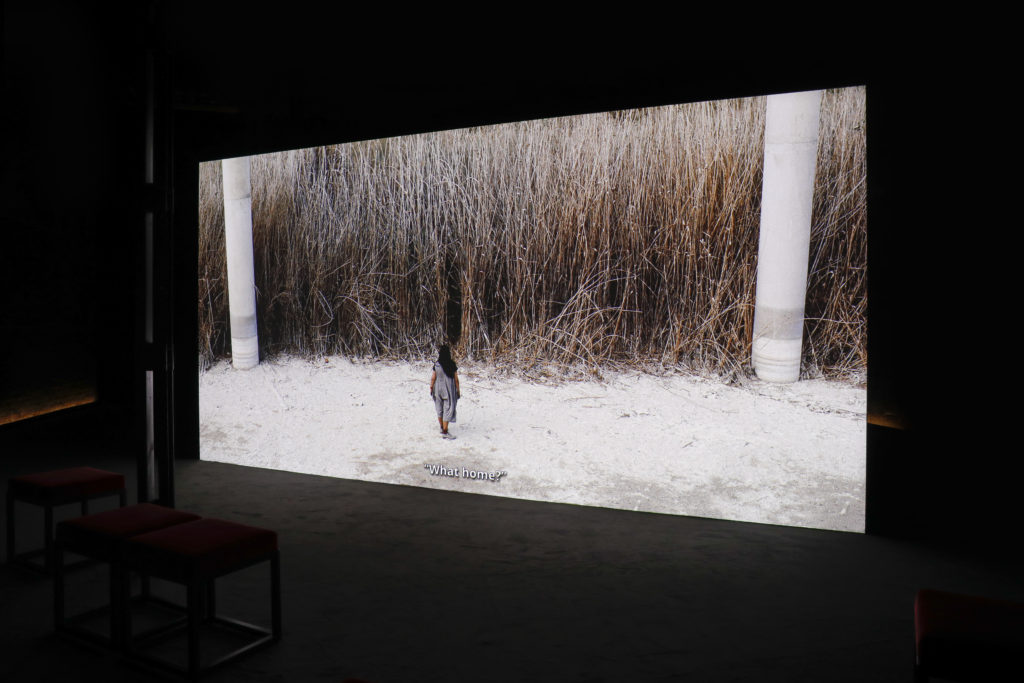 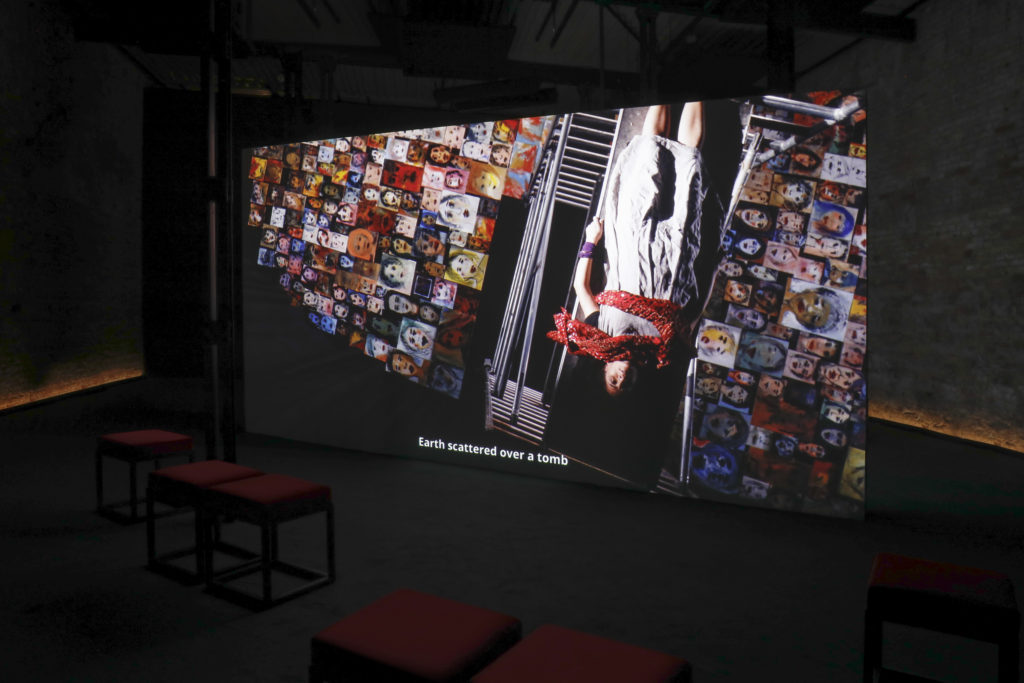 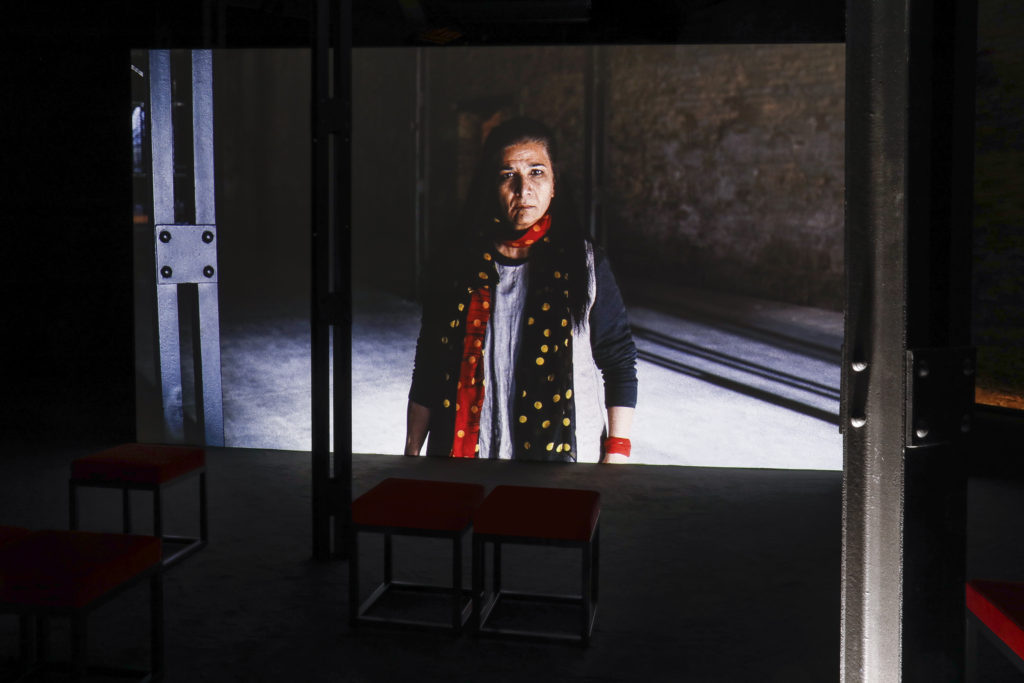 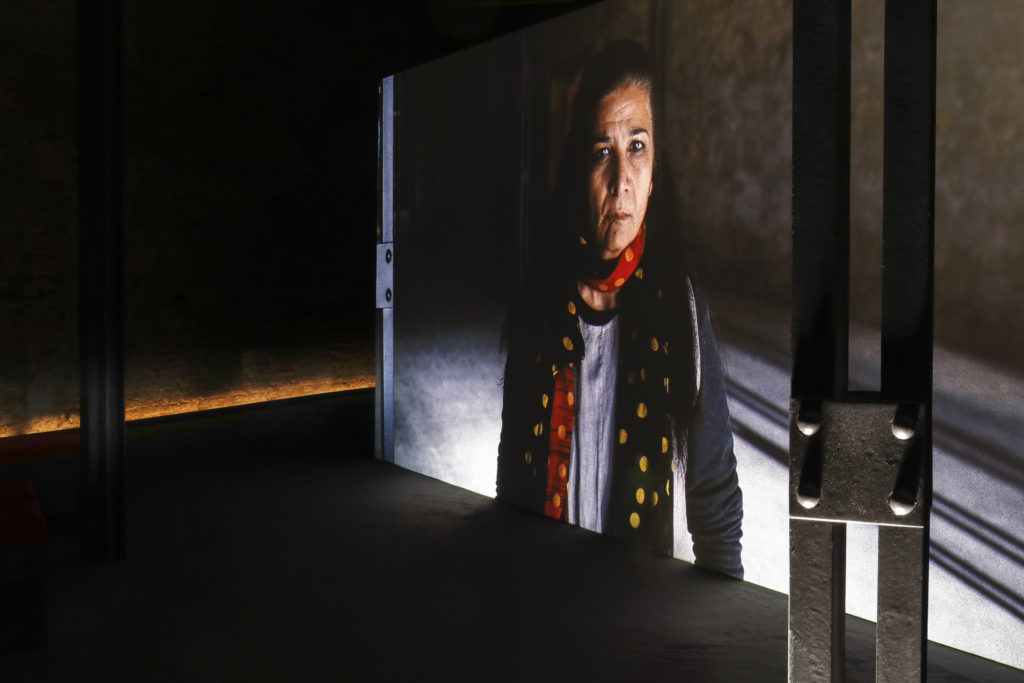 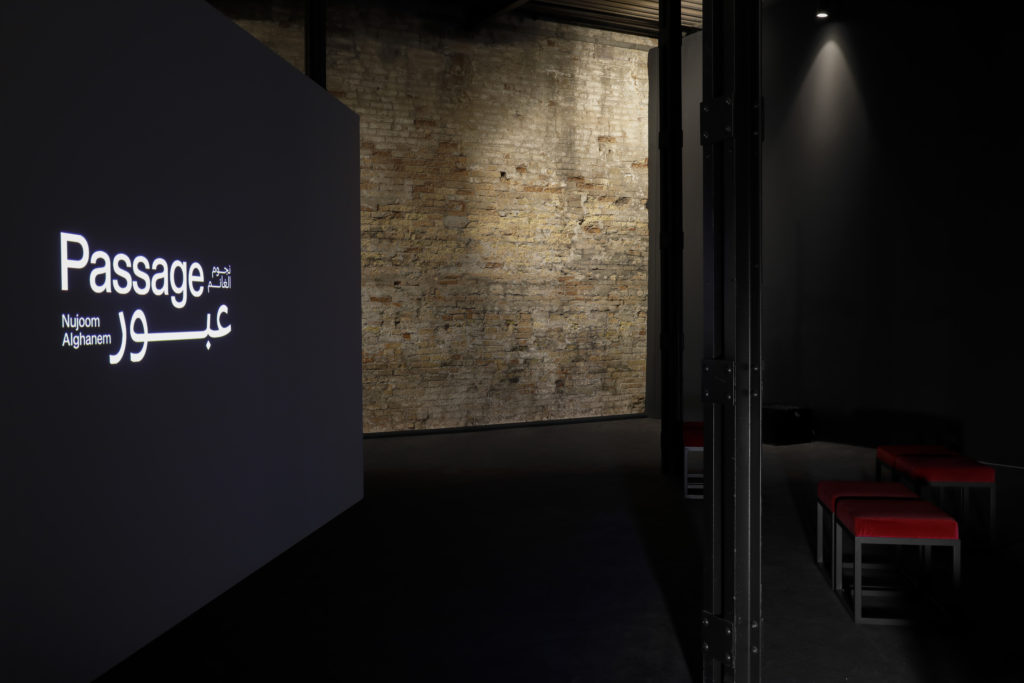 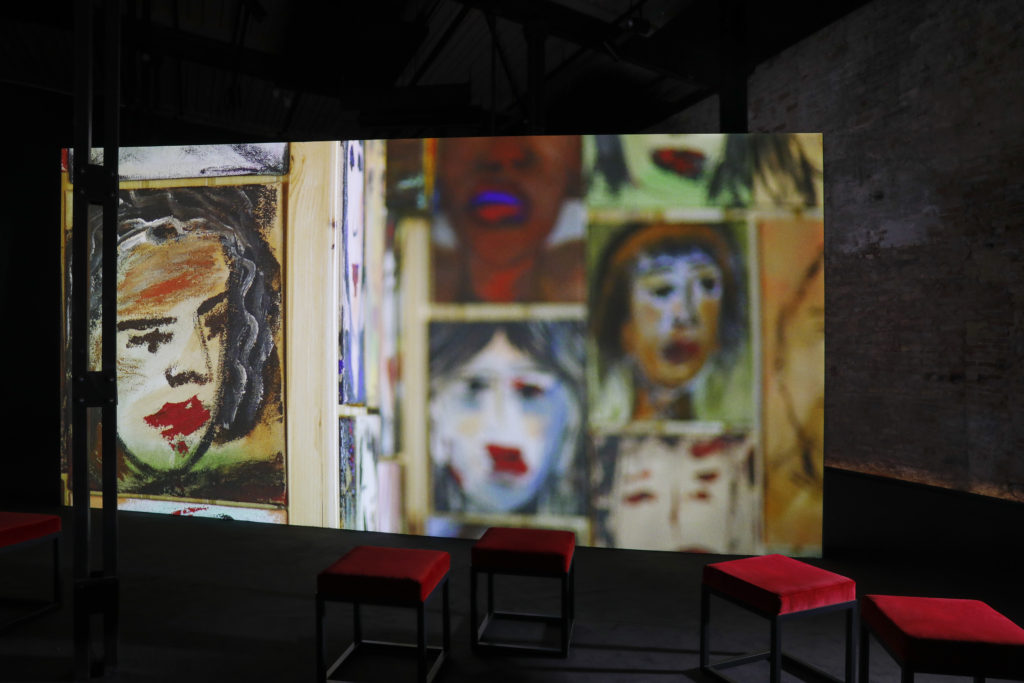 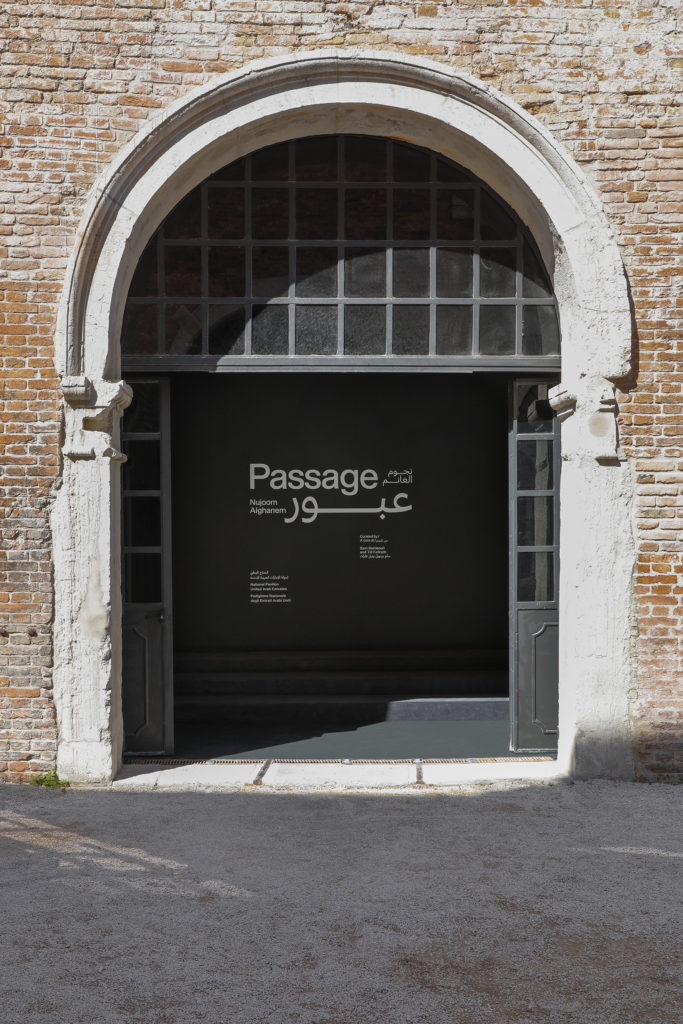 A site specific two-channel video and twelve-channel sound installation commissioned for the National Pavilion UAE that expands Nujoom Alghanem’s experimentation with forms of contemporary Arabic poetry through the language of film, providing a poignant reflection on the experience of displacement.

Passage is a new site-specific, two-channel video and twelve-channel sound installation, which expands Nujoom Alghanem’s experimentation with contemporary Arabic poetry through the language of film. Taking her quintessential 2009 poem, The Passerby Collects the Moonlight, as a point of departure, this installation explores the universal experience of displacement. It is structured along two distinct narratives, one “real,” the other “fictional,” which are simultaneously projected as two non-linear films on opposite sides of the same screen. The “real” narrative depicts the endeavors of Nujoom and Amal Hawijeh, an renowned Syrian actress residing in the United Arab Emirates, to create a film for the pavilion. The “fictional” narrative is an aestheticized portrayal of Falak, a displaced woman on an arduous journey. The latter is conceived by Nujoom and played by Amal. This Brechtian conflation of reality and fiction, culminating in a scene that depicts Falak arriving at the pavilion in Venice, prompts the viewers to consider the parallelism between the film’s three protagonists: the director, the actress and the fictional character. These three women of a similar age are connected by the experience of shared dualities: the hidden and the revealed, fragility and power, belonging and displacement.

The experience of passage and duality also permeates the design of the exhibition space, where visitors can enter and exit from either side of the pavilion. A large 3 × 6 meter screen, diagonally positioned at the center, divides the space into two symmetrical halves. The viewers are invited to engage both with Nujoom and Amal’s real process of creating the film, as well as with the cinematographic portrayal of the fictional character of Falak. At several moments throughout the film, Nujoom’s voice is heard reciting segments from her poetry. The two films are bound by one shared soundtrack, which evokes a different meaning on each side of the screen. Only after visitors have crossed over to the other end do they realize that the two ostensibly separate films are in fact two sides to the same story. The viewers and the film’s protagonists alike will have each undergone a “passage” of their own.

Much of Alghanem’s multidisciplinary practice as both a poet and filmmaker is informed by a critical reflection on themes of estrangement. She is unyielding in her persistence to capture the universal human dimension of displacement. That is why Falak does not belong to a particular geography, nor does she speak a recognizable language. With Passage, Alghanem ultimately questions art’s ability to meaningfully impact the lives of those whose story it seeks to tell. It is perhaps somewhere along the passage between reality and fiction that the true answer to this question lies. 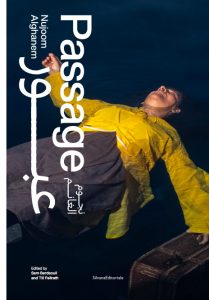