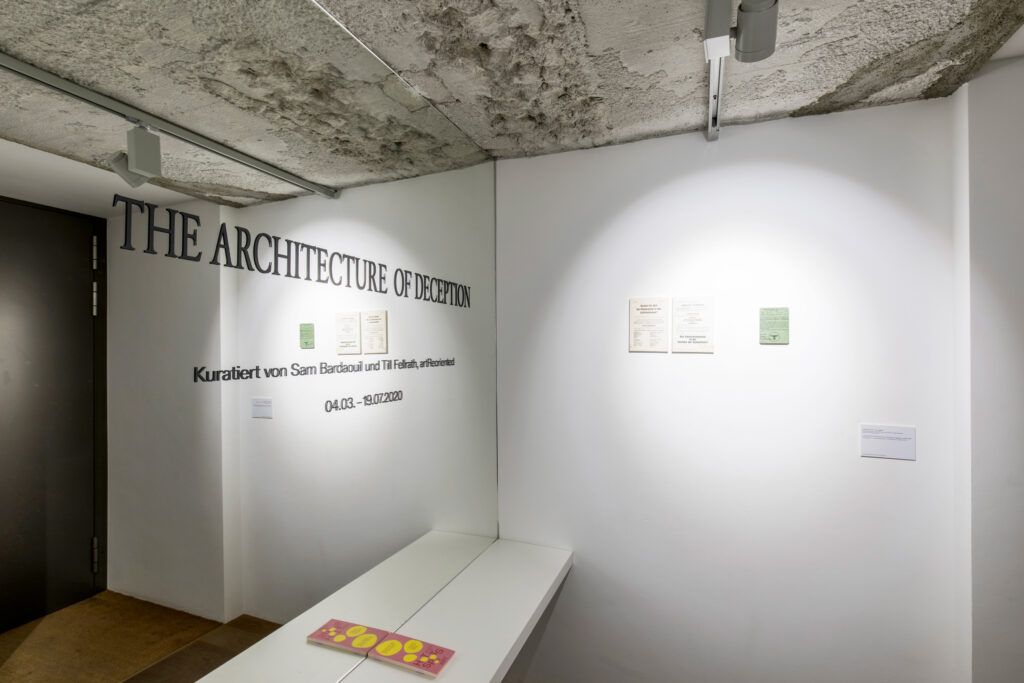 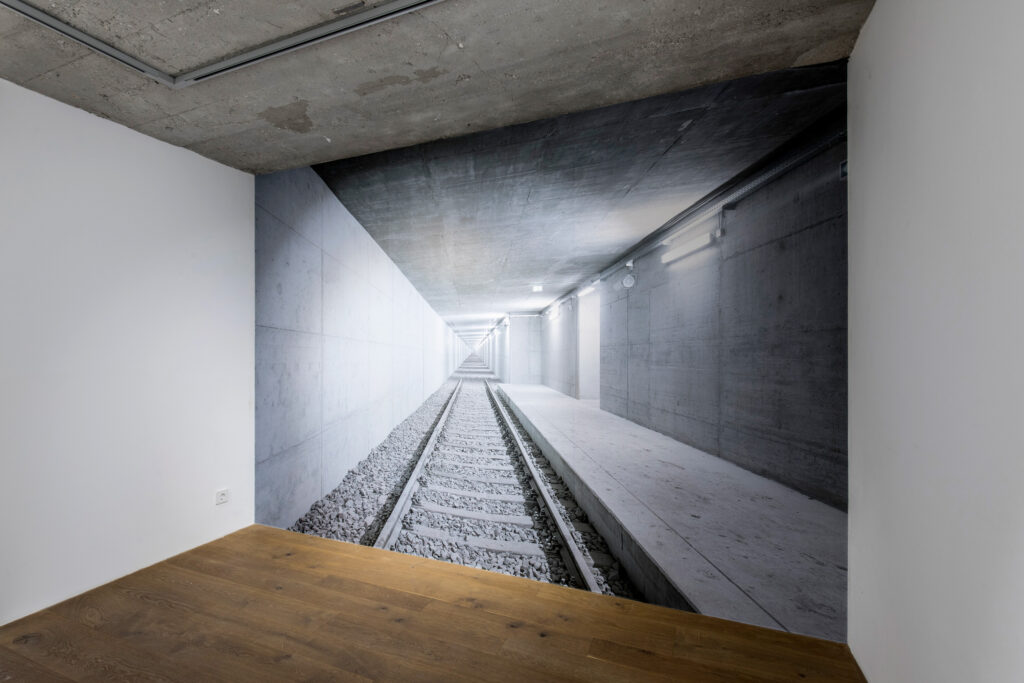 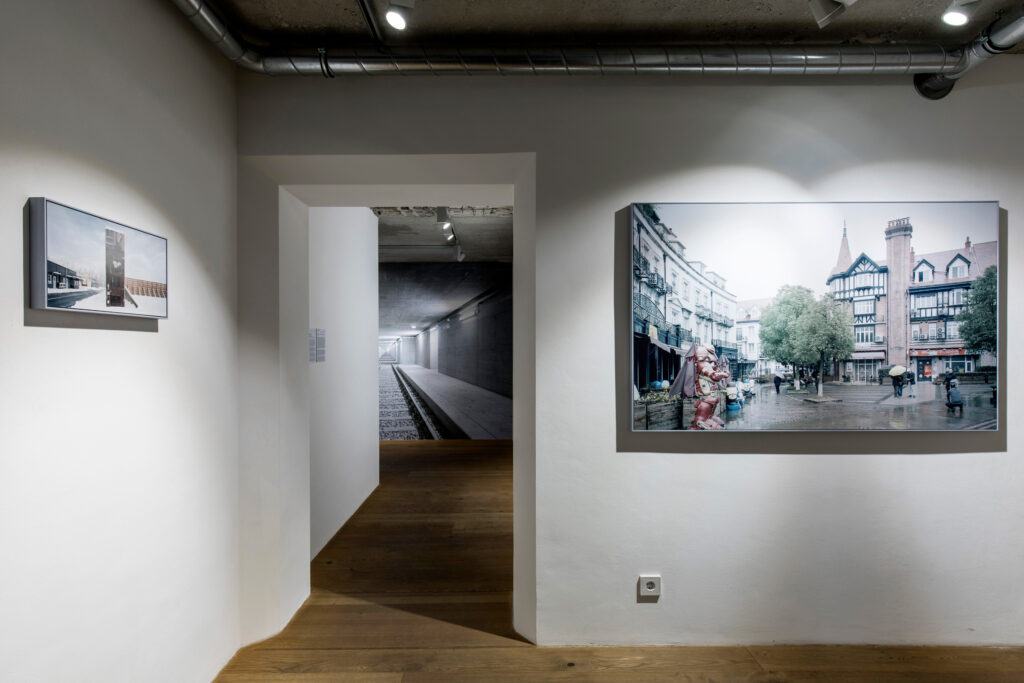 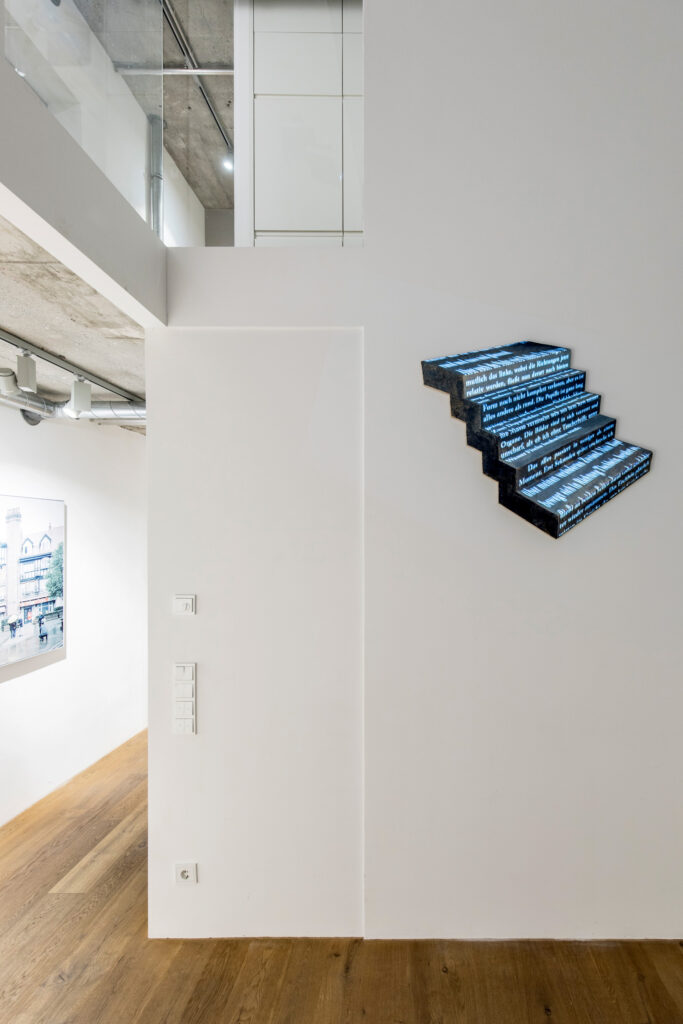 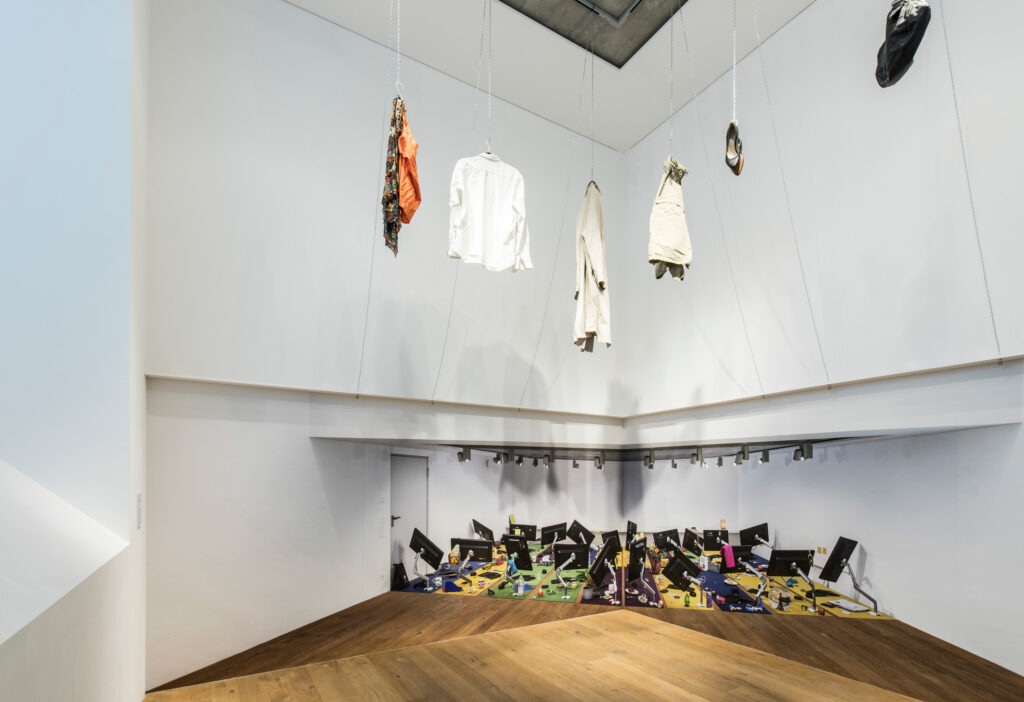 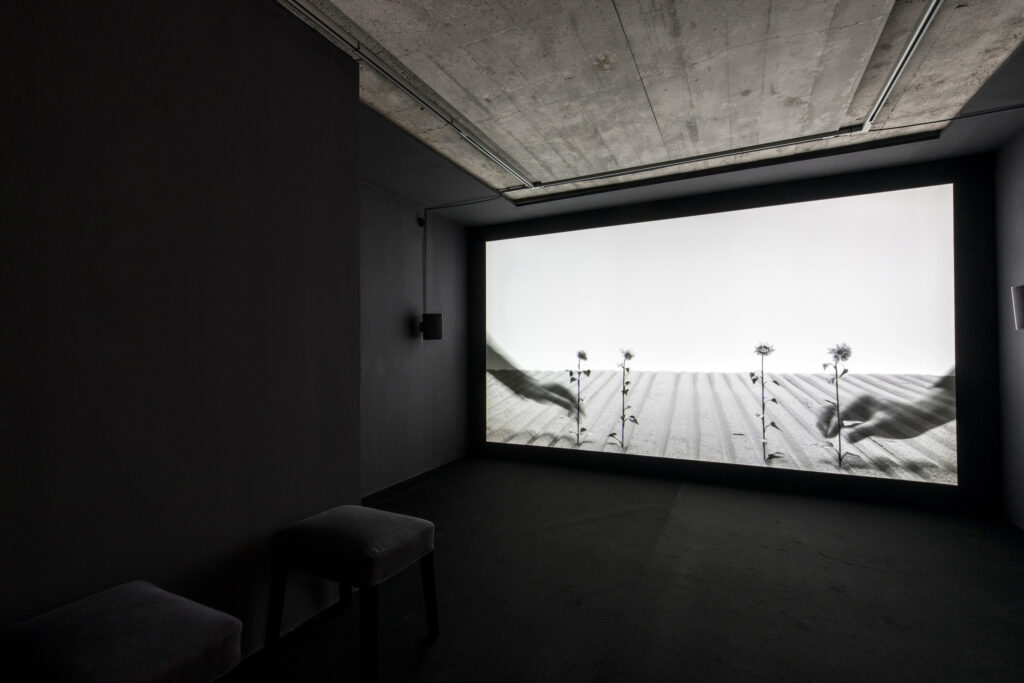 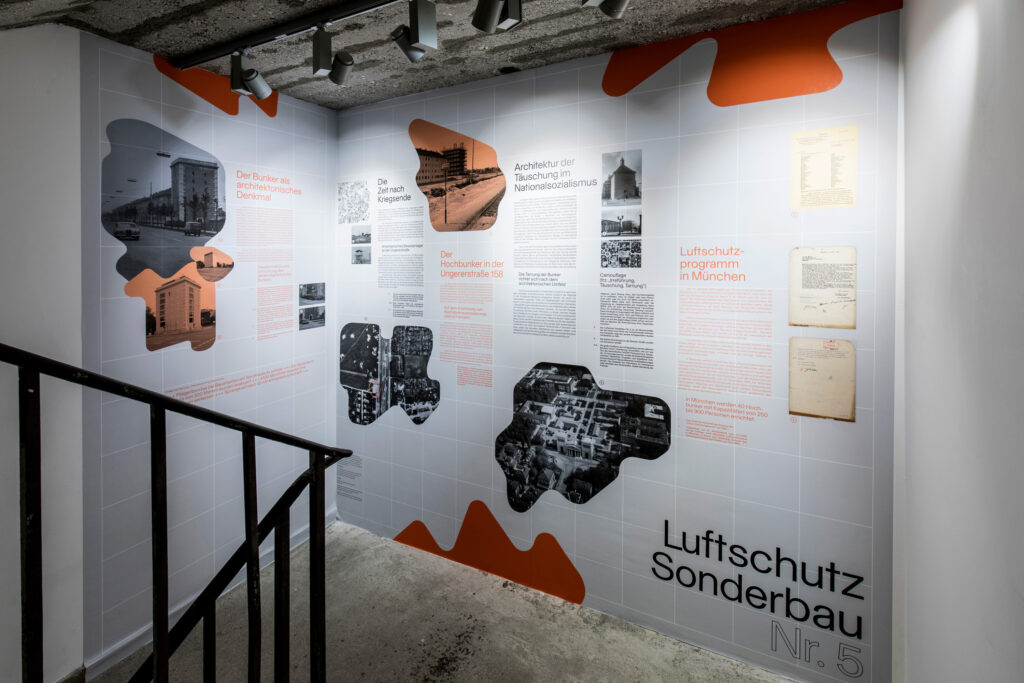 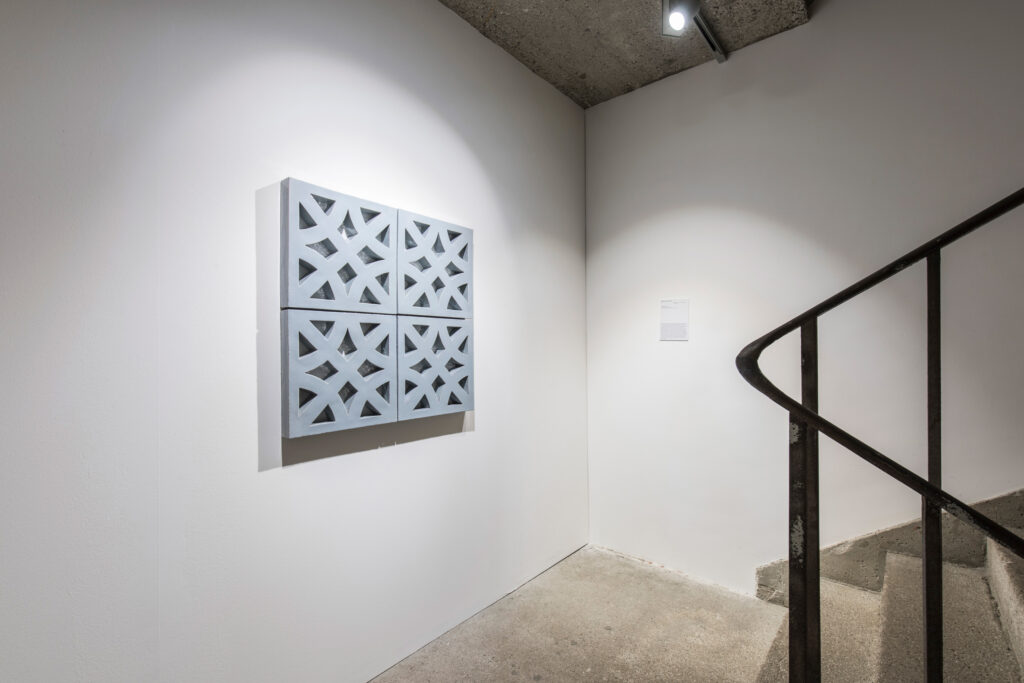 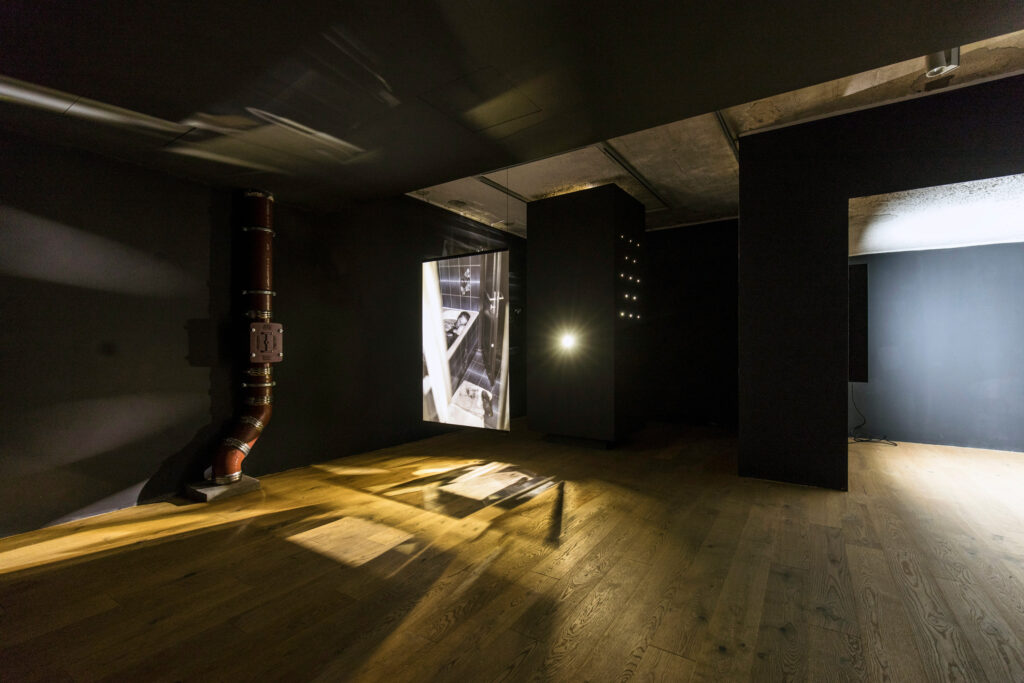 The exhibition trilogy The Architecture of assembles artworks that explore the fault lines between art and architecture. Taking its departure point from the building that houses BNKR itself, it responds to the changes in architectural appearance and appropriation since it’s construction as a WWII bunker until its current function as a residential space. With a diverse range of artworks and site-specific commissions, The Architecture of is intended as a spatial experience that encourages the viewer to critically reflect on the complex relationship between the physical and psychological dimensions of our lived realities.

The Architecture of Deception, the first part from this multi-faceted trilogy, consists of a group exhibition that takes its departure point from the building that houses BNKR itself. Built by the Nazi regime in 1943 to shelter workers in Munich’s district of Nord-Schwabing during bomb raids by the Allied Forces, it was designed to arguably look like a non-assuming residential building. The exhibition responds to the changes in architectural appearance and appropriation since the building’s construction until today. By assembling a diverse range of works by six artists and artist collectives that employ strategies of architectural and visual deception, viewers encounter a series of perplexing experiences and are invited to question realities that are imposed by architectural creations.

The work of Bettina Pousttchi sits at the intersection between architecture, sculpture and photography. She alters our perception of seemingly familiar objects through sculptural modifications by which she appropriates specific architectural traditions and found objects to imbue them with new appearance and meaning.

In their ongoing series Icons, the artist duo Cortis & Sonderegger have been recreating images of internationally recognized photographs. In their meticulous recreations, they include traces of the production process and tools in order to illustrate how different levels of reality are intertwined. The exhibition will debut the artist duo’s Crates series, consisting of a three-dimensional model and a projection whereby the viewer is directly implicated in an act of voyeurism.

A new site-specific commission by Emmanuelle Lainé consists of a large-scale photographic wallpaper that contains architectural features of the exhibition space to create an illusion of spatial continuity. In line with her artistic practice, the installation deals with the relationship between art, economic productivity and digital technologies. It triggers a direct dialogue with the exhibition space, its geometry, history and the people who work in its building.

The exhibition features a number of works from the photographic series The Potemkin Village by Gregor Sailer. They are placed in different gallery spaces and form a common thread throughout the exhibition. The works document replicas, copies and illusions that were built as movie sets, army training facilities, or real estate developments, creating places of architectural deception that hide their true state of being.

Through his work, Hans Op de Beeck seeks to create a form of visual fiction that delivers a moment of wonder, silence and introspection. The third and final chapter from his trilogyStaging Silence takes the viewer on a visual journey through depopulated, enigmatic places. These small-scale models are built up and taken down in front of the eye of the camera in a constant flow of illusionistic deception.

Questioning reality and perception is one of the leitmotifs of The Swan Collective. Through a combination of one VR work, and two mixed media installations, visitors immerse themselves in an architectural sphere where conditions from the “real” exhibition space merge with those of the “virtual” reality. The tension between analog and digital puts the human perception of reality to the test.

A comprehensive Archive Wall, presented at the center of the exhibition, complements the featured artistic positions. It provides the historical context for the initial use of the building as an actual bunker during the Second World War. It also illustrates the history of camouflage and architectural deception as a strategy of protection from enemy bombings that was devised by the Nazi Regime. Equally so, it traces the ensuing history of the building and its changed appearance and usage over time.

Spatially driven and thematically concerned, The Architecture of Deception is intended as a critical experience that encourages the viewer to search beyond the obvious. It reminds us that what we see is often a matter of perspective, and rarely the form of an absolute truth.

The Architecture of Deception

The Architecture of Confinement

The Architecture of Transformation